SunDance proudly joined the ranks of the most accomplished printers in the industry when we received the coveted Golden Flamingo award for “Florida’s BEST Printer.” The Golden Flamingo trophy is awarded in special recognition of the company with the most "Best of Category" wins at the Florida Print Awards. SunDance is very proud to receive this distinction for our work over the past year.

In addition to the earning the title of “Florida’s Best Printer,” SunDance also took home 36 accolades, including 19 Best of Category, 10 Awards of Excellence and 7 Judges’ Awards — with trophies for Florida's Best Poster and Florida's Best Printer's Self-Advertising. SunDance  also received a total of 4 awards from The Printing Industries of America Premier Print Awards - 3 Certificate of Merits and 1 Award of Recognition

The FGA (formerly Printing Association of Florida) hosts the annual Florida Print Awards Ceremony to showcase individuals, companies and organizations that uphold the highest standards in the creation and production of print communications. This year’s 32nd Annual Florida Print Awards was held August 2, 2019 in Orlando, Florida at Omni Orlando Resort at Champions Gate.

Throughout this “Night Among the Stars,” SunDance celebrated with the industry’s top-performing printers during a cocktail reception, banquet and industry appreciation gala. But beyond the glitz and glamour of an awards ceremony, we are humbled and honored to be recognized by our peers for our unwavering dedication to excellence in print media. Our goal is to live up to the legacy of the greats who came before us, and to continue our pursuit of excellence through the next era of print technology. 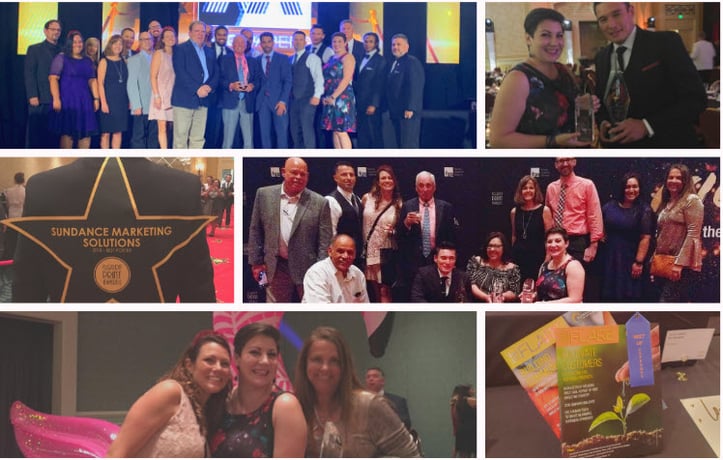